A-Basin has officially announced they will be opening this Friday, October 17, 2014.  Weather and temperatures have been cooperating, allowing for both man-made snow and some natural snow to start piling up on the mountain.

Snow-makers and staff work hard to create a ski-able base that will allow the resort to open as soon as possible.   There is typically a friendly competition between Arapahoe Basin and Loveland Ski Area to be the first resort open, not only in Colorado but across the U.S.

Although it’s been just a few months since the resort closed in late June, local skiers and riders are always super excited for opening day and can’t wait to get back out on the slopes. The hype is real.  Some people even go as far as camping out in line the night before in hopes of getting the coveted ‘first-chair’ of the season.   Don’t miss opening day at Arapahoe Basin this Friday in the high country, it’s always a ton of fun! 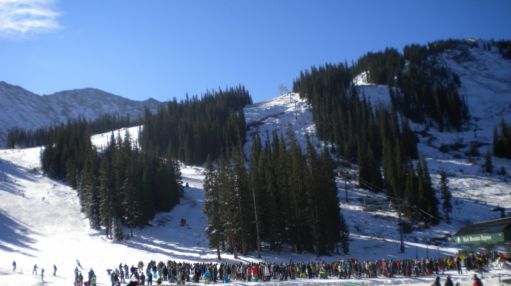 Crowds lining up at A-Basin for their first run of the season at a past opening day!