Long ago, before there were snowplows as we know them, there were rotary snowplows. These huge machines had giant, snow-blowing blades which cleared narrow gauge railroad tracks. The blades threw snow 30 feet away on either side of the tracks and were an amazing mechanical feat. Four to six steam-driven locomotives were needed to push these behemoths up Boreas Pass on the way to Breckenridge. Visitors to the Rotary Snowplow Park can see one of these machines on display and learn about transportation and the railroad in early-day Breckenridge. 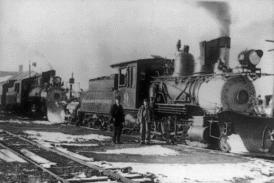 The rotary snowplow you see in the Breckenridge Rotary Snowplow Park is not the one used by the Colorado & Southern Railway to get from Como to Breckenridge via Boreas Pass; the track, however, runs on the original right-of-way. This 108-ton snowplow was built in 1901 for the White Pass and Yukon Route in Alaska. It was moved to Denver in 1988, where in underwent repairs. Six months later, the restored rotary arrived in Breckenridge. It is one of only five known narrow-gauge rotaries still in existence and you can be one of the few to notice this great machine.

The Rotary Snowplow Park has extremely limited hours and availability. It is open in the summer (June-September) with tentative open and close dates. The park is only open Tuesday through Sunday and from 12-4PM only! Luckily it is free, but has a suggested donation of $5. For more information about directions and nearby attractions click here!