While we were busy preparing to celebrate Keystone’s 20th Annual Bluegrass and Beer Festival in River Run Village today and tomorrow, it has given us plenty of time to drink some good beer in preparations!  We make a couple of thousand pretzel necklaces to give out to our loyal customers and festival attendees each year who visit our booth in the festival!  While some people think that making thousands of pretzel necklaces might be complicated and a tedious task, we get to taste some beer at the same time so we don’t mind at all! 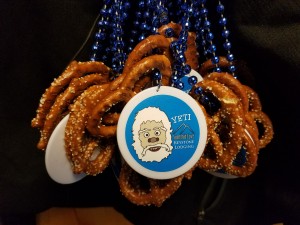 One of the beers I was drinking was a  Belgian Beer from Bruz Beers in Denver called Jagged Twilight and snacking on the thousands of pretzel pieces we have left over from making over 2,000 pretzel necklaces and BAMN… It was freaking delicious mmm mmm good beer.  This beer named after the jagged West Needle mountains of Colorado really makes you feel like you are on top of the world!  Or maybe the super high alcohol content helped us feel like we just drank a beer at 14,000 feet.  Either way the beer was very well made and everything from the initial pour, smell, and my favorite the taste, was amazing!

This beer looks and tastes like you are on top of the world!

Bruz Beers is a new brewery among the thousands of new breweries popping up around the Colorado, except that they decided they were not going to mess around with easy to brew beers but instead focus on replicating the experts of the world, the Belgians!.   I was lucky enough to travel to Belgium as a younger version of myself and realized that they just know how to make and drink really good beers, you know why?  They have been doing it forever, and we all know that practice makes perfect.  Then Bruz Beers decided if you have something perfected, then replicating it and making your own is a really smart move!  Finding a local brewery that that takes pride in what the beer experts have been doing is a great way to do business, and when you make great beer, you earn the way to go from SummitCove!  Bruz beers has been working on making a high quality beer and not making a million gallons to sell, quality over quantity!

Tasting the beers and buying some for your self (or me)!  When you are coming or going from Keystone to the airport the brewery is really not that far out of the way, and some might say it is the only way to come and go from Keystone is to stop at a brewery on your way!  It is only about 4 minutes off of I70 and I highly recommend the stop. Taste them all to see which one is your favorite, then buy one and enjoy the super cool new clean, but real brewery, I was able to walk around and get a quick tour of the place and enjoy a lesson from the master brewer who calls himself Charlie.

Charlie is a talker, and man o man do you just want to settle down with your beer and listen to his stories.  Not only is Charlie an expert and is able to make amazing beers, he is nothing more than a kind and generous soul who likes to share his love of beer with anyone willing to listen.  You wouldn’t know that you are talking to world class expert who can probably brew beer better than most, he is capable of explaining the complexities of the science to a simple mind like myself.  When I taste beer I either like it, hate it, love it, or absolutely have to have another becuase it is fantastic, this guy can not only explain why, but also tell you a story that blows your mind while enjoying your beer.

If you are headed home from Keystone for the beer and bluegrass festival this weekend then you should really stop here on your way home!  You can find Bruz Beers online at www.BruzBeers.com and in person at:

Look for these two when you get there.  They will certainly help you out, get you a bunch of tasters and talk to you about what they love, good BEER!  Ryan is on the left and Charlie on the right.  Tell them Tyson sent you from Keystone! 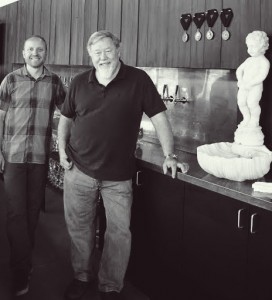 Talk to these two and get some tasters!