The recent and frequent snowfall has not only helped with terrain coverage but it has also allowed the terrain park to build bigger and better features. In fact Keystone’s A51 terrain park, which has consistently been ranked in the top 5 parks in the country, opened their big jump line this week. This is one of the earliest openings to date and consists of three massive jumps for experts only. The features have attracted professional skiers and snowboarders, who have descended on Keystone in masses, to train for the upcoming Dew Tour in Breckenridge. 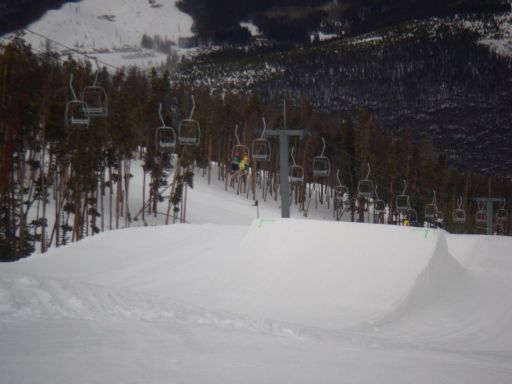 If you ever find yourself riding up Peru lift you will get a bird’s eye view of the terrain park. If you are lucky enough you may get to witness the amazing talent and skill of the athletes who have been training there over the past few weeks.

The Dew Tour is a slopestyle and halfpipe series that has three stops throughout the country. Breckenridge Nike 6.0 Open is the first stop. The event takes place on Breckenridge’s Peak 8, which can be reached by taking the gondola to the base from Breckenridge Station. For additional info click here and check out the schedule below.