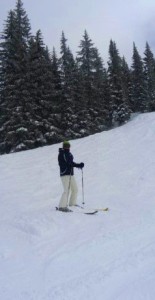 I have to admit.  I’ve never ever been a fan of Winter.  Growing up in Northern Minnesota, I was constantly at the mercy of Old Man Winter, his drastically cold temperatures and complete block of the sun for nearly six months of the year made me resent anything that even resembled this miserable season.  I was involved in winter sports, cross-country skiing and ice skating (and even a little downhill), but still I just absolutely despised the cold.

When my husband suggested we move to Colorado, I was a little apprehensive, to say the least.  But I decided, after much thought, that slightly warmer temperatures, a ton of snow and INDUSTRY during those gray days might be a step in the right direction.

We packed everything we owned, tossed our dog in the car and drove out in October.  The first few weeks, we hiked our poor legs off but soon after, the snow began to fall.  Constantly!  Snow like I had never seen before, like sugar falling from the sky.  Not that miserable heavy wet stuff that we get near the Lakes.  This year has been unbelievable for snow.  I never thought I would love it so much.  It is also warm here.  Like warm, a 40 degree high in February!  It’s absolutely brilliant!

And if that isn’t enough, on days that it isn’t snowing in Keystone (giving us that delightful fresh powder to glide down the hill on), it is an sunny as San Diego.  The sun always makes me feel that bit happier.  And it makes the views in Keystone absolutely spectacular!

After living in Summit County for nearly four months now, I’m not sure I’ll ever go back to the midwest.  I can safely say, I am a winter girl.  I guarantee you, if you spend even a weekend in the mountains (especially these mountains) in the winter, you will dream of moving here.  Until you actually do.