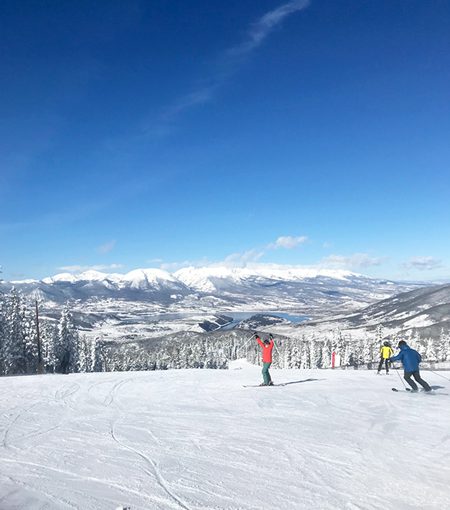 Not only is Keystone open for the 2019-2020 season, they are open with record breaking snowfall!  Yes, Keystone has received 44 inches of new snow in the month of October so far, 17 inches of that in the last week alone.  This beat the pact 2006 October snowfall record of 43 inches at Keystone.  The base is sitting at 18 inches and getting deeper everyday. Today there are 4 runs open and 6 chair lifts running, but tomorrow Keystone is planning on opening up even more terrain, with the addition of intermediate runs Silvermaster, lower Paymaster and Spring Dipper, which will have terrain park features.  Also opening will be advanced run, The Edge, and River Run, intermediate, which will take you all the way to the bottom of the mountain to River Run Base Area without having to download on the River Run Gondola. It is time to make your first trek of the season to the mountains!

Get those skis tuned, dig out your ski clothes, helmet and goggles, it is time to go make some turns. SummitCove Vacation Lodging has some amazing early season deals so you don’t have to fight the traffic down the hill.

Beginning November 8th, the 2-week long Keystone kickoff starts with a double billed Reggae/Dub/Ska show, featuring Dubbest from San Diego and Boulder’s own Policulture on November 8th.  The excitement for the 2019-2020 season pumps up with swag giveaways, raffle tickets, and bar specials at Warren Station. Proceeds will benefit Team Breck Sports Club and Team Summit so your money will be going towards a great cause.  These teams start kids as young as five and have been the starting point for several Olympic skiers. They teach many life skills through ski racing and have a world class coaching staff. What an amazing opportunity for your fun money to go help the local community out.  Ski and Snowboard industry movies will be screening on November 9th.

On November 15, treat yourself to a night of laughs with the first night of the Winter Comedy Series at Warren Station. Headliner John Novosad and opener, Aaron Urist will have your bellies hurting by the end of the night. Novosad is originally from Boulder, CO and has appeared on a variety of network tv shows such as The Late Late Show with Craig Ferguson and is a favorite at Denver’s Comedy Works. Show starts at 7:30 pm, tickets are $15 in advance or $20 day of show.  Check out more upcoming events at Keystone here.

This is one of the best, (if not the best) early seasons we have seen in over 20 years here at Keystone Resort. Book your condo, tune those skis, and join us for the new ski season. Conditions are optimal and the snow already loads of fun!  The 2019-2020 season is going to be amazing and we are just getting started.

Now that the snow is falling, the rumor mill is churning.  When is Keystone’s opening day for the 19/ 20 ski season?

Well what do we know to be true? Keystone has recently upgraded and added to its snow making equipment inventory and has already been making snow for the past couple of weeks.  Today’s snowstorm is now bringing in some significant additional natural snow to that mix and it is starting to build a nice base on the upper half of the mountain.  We know Keystone opened last year on November 7th and in previous years on November 10, 2017 and November 18, 2016.  But, now that Keystone is competing with Loveland and Arapahoe Basin for first chair of the season in Colorado (and the country!), the race to open is on!

We also know is you can go to the Keystone lift ticket website and purchase lift tickets beginning October 25th, 2019. There are also some kickoff events scheduled starting as early as October 26th, 2019, the Halloween Costume Contest at Summit House!  So, hopefully that points to a sooner rather than later opening day!

Although nothing has been officially announced, this rumor monger believes we can get our skis tuned up and book a room with SummitCove Vacation Lodging for first chair in the next week or two! We know that early season stays offer the lowest rates of the ski season and it is a great time to visit the high country! See you on the ski slopes!

Snowmaking has begun at Arapahoe Basin!  Last night the snow guns were fired up, meaning the race to open has started!  Each year the Loveland and A-Basin ski areas host a friendly competition to earn bragging rights as the first resort to open in Colorado and sometimes even in the country.

Temperatures and conditions need to be just right in order to make snow and as always, the colder the better!  A-Basin has not yet set an opening date, but they typically open in mid-October depending on the conditions.  They are also one of the last resorts to close in the state, sometimes closing as late as June.  Bring on the snow, we are all ready for winter!