Next time you are on the slopes at Keystone Resort for a day of downhill skiing or snowboarding, look around. Something has changed since the early 1990’s and it’s not just the decreasing number of fluorescent pink and white ski jackets! It is the increase in helmets. In 2004/2005, it was estimated that 33% of all skiers and snowboarders wore helmets. For the under 9 crowd, that number was 66 percent. No longer is it a fashion disaster to wear a helmet on the slopes. In fact, helmets are available in many colors and styles. So besides not being a fashion outcast, what are the other advantages of wearing a helmet when you are flying down the slopes? According to the National Ski Areas Association, just the act of donning a helmet can reduce your potential injuries by 30-50 percent for minor to moderate head injuries.

Although Keystone Colorado had incredible snow last year, even the powder did not soften the blow enough to prevent head injuries. An experienced snowboarder, Shawna Davis, reports that she was grateful to be wearing a helmet on the day she was injured. Shawna reports that she remembers riding the lift up with her husband, Jack, in the morning, but can’t recall anything more until she found Jack at the top of the mountain several hours later. He said he had been looking for her all day, but she couldn’t tell him where she was or what had happened. She did have a slight bruise under her goggles to indicate she had an accident. When Shawna asked repeatedly about their daughter’s whereabouts, Jack knew something was seriously wrong and flagged down ski patrol for help getting her off of the mountain.. The MRI revealed a minor concussion, and Shawna never regained memory of the accident itself, but continued to have major headaches for weeks after the injury. 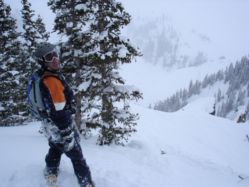 When shopping for a helmet, it is important to remember that a proper fitting helmet is the only one that will protect you from injuries. In order to find the one that fits best, try on as many as possible and chose the one that is snug yet comfortable. When you rock it back and forth, it should not move. Make sure it is not so snug that it pinches or pulls hair when you turn your head. A good test is chewing gum while you have your helmet on. If it gives you a headache, it’s too tight! Think about the features offered, such as, removable padding, vents for airflow and ear protection. If you ever experience an accident while wearing your helmet, be sure to have it inspected at your local ski shop. If the Styrofoam core is compressed, the helmet is no longer as protective.