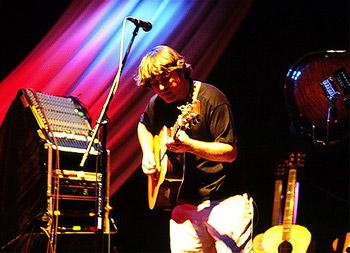 According to the Mayan Calendars, the end of the world is predicted to come down December 21, 2012.  Popular musician, Keller Williams is throwing an 'End of the World' celebration right here in Keystone for 2 nights on December 21 & 22.  Williams is  known as a 'master of acoustic guitar' and has teamed up with many different artists over the years since his first album back in 1994.

Join Keller Williams and his Compadres at Warren Station in Keystone, Colorado on December 21st and 22nd for two nights of fun.  The first night will feature Keller, Billy Nershi and Keith Moseley picking bluegrass, as well as a Keller solo set.  On the second night, experience the funky grooves of Keller, Kyle Hollingsworth, Keith Moseley and Dave Watts along with a solo set from Keller.

Tickets for the event are $30 for solo nights or $50 in advance for both nights.  Book a condo in River Run Village, such as Jackpine Lodge, Dakota Lodge, or Silver Mill Condos to be close to the shows, along with restaurants, bars, and the ski slopes at Keystone Resort!