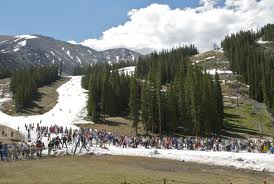 Arapahoe Basin has announced that it will close for the ski season on Sunday, May 6, 2012.  Due to a lack of spring snow, it was decided not to continue the season as planned into early June.  On the bright side, skiers and riders can look forward to the potential for an early opening this fall.  A-Basin had recorded one of its earliest openings on record this past fall on October 13, 2011. By Sunday, A-Basin will have been open for 207 days.

On Saturday, the Huck, Rock and Roll slopestyle event will take place at 10 am in the Treeline Terrain Park.  Compete for a chance to win cash prizes, sponsor gear and a RAMP snowboard!  John Trucelli and the Stolen Band will perform a free concert at 1 pm, and there will be a luau and pig roast on Saturday to kick off the closing weekend events.

For those who were planning to attend events throughout the month of May at A-Basin, keep in mind that the ski area is still holding its Chili Festival on May 19th, and the Festival of the Brewpubs on May 27th.  The summer events calendar will also go on as planned, so if you are heading up to Summit County for any of these events, contact us at SummitCove today to get started on reserving your lodging!