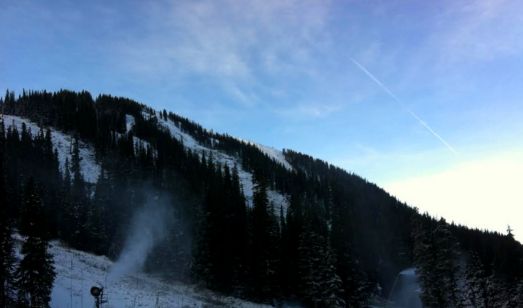 Summit County woke up to snowy peaks on September 29th  and Copper Mountain began snow-making that very same day. Arapahoe Basin followed close behind, firing up their snow blowing machines Oct 2nd, after getting several inches of snow in the past few days.  Snow blowing crews plan to start at the top of the mountains, building a heavy base layer while temperatures are still in the high 20s at night.  Loveland Ski Resort reported 7+ inches already and started their efforts on the 2nd as well. The race to be the first resort to open has begun!

In preparation for their October 31st opening day, Keystone Resort plans to start making snow on October 6th. Opening day activities include trick or treat in River Run, a haunted ski trail, a parade of costumes for the kids, and free hot cocoa, doughnuts and prizes!

Copper Mountain plans to open on Halloween as well and will feature a Trick or Treat Jam and costume contest. Breckenridge opening day is November 7th and will start making snow October 17th. Vail plans to open November 21st and Beaver Creek opens Thanksgiving weekend, November 27th.  Now is the time to start planning your ski vacations, book early for the best deals and selection on vacation lodging.