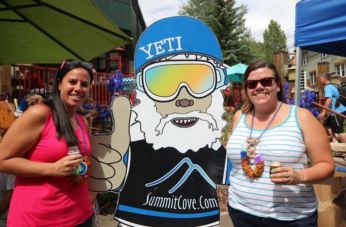 Be sure to join us on August 6th and 7th, 2016 at Keystone Resort for the 20th Annual Bluegrass and Beer Festival. That's right, we are celebrating 20 years of one of the best Colorado beer festivals around!

Enter the River Run Village and find yourself in the middle of live bluegrass music playing all weekend on 3 different stages along with 35 Breweries serving up more than 100 brews. Get a glass-pass to start tasting, the admission includes unlimited beer tasting from all of the breweries on site from 1 - 5 pm.  Local restaurants will be setup throughout the village as well, serving up delicious food for purchase to pair with the beer of your choice and of course, fantastic bluegrass music to enjoy.  Keystone's Bluegrass and Beer Festival is one of the best organized in the state because we've been doing it for 20 years.  What could be more fun than a day full of brews, delicious food and amazing bluegrass music in one of Colorado's most beautiful mountain towns?

Some of the breweries attending this year will include well-known Colorado favorites like New Belgium, Oskar Blues Brewery and Left Hand Brewing Company as well as local brews from all of your Summit County breweries such as Backcountry Brewery, Baker's Brewery, Breckenridge Brewery, Broken Compass Brewery, Pug Ryan's and Dillon Dam Brewery.

This is Keystone's favorite summer event so be sure to join us!   We are offering great weekend packages in River Run Village starting at $461.00 for 2 nights lodging and 2 one-day glass pass tasting tickets.  Head up early on Friday Afternoon for the kickoff events or to head up on the mountain with a free gondola ride at the Friday Afternoon Club. Friday evening's Bluegrass & Beer kickoff party event is called "Eat, Drink, Pick" a Beer Maker's Pairing at Warren Station. New Belgium Brewing and Chef Chris Rybak will work together to present tasting dishes to compliment New Belgium flavors!  Live Bluegrass music will be happening all night as you work through six small plates, each paired with a New Belgium brew and hear about flavor pairings, menu design and general education about the brewery.  Doors open and tasting begins at 7:30 pm running until 9:30 pm, with bluegrass music until 10:00 pm. Cost for the event is $55 per person in advance or $65 per person day of event, buy tickets here.

Don't miss out on one celebrating the 20th anniversary of one of Keystone's most beloved summer festivals, the Bluegrass & Beer Festival happening on August 6 & 7 in River Run Village.  Book your lodging and tickets together with SummitCove to save up to 15% on the weekend.