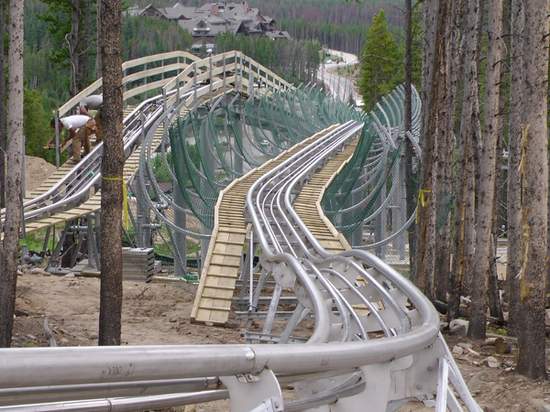 Construction at Breckenridge Ski Resort has been underway to bring us all a new Alpine Coaster! Known as the Gold Runner, the coaster is located at the Peak 8 base area and will operate year round, winter and summer! The Gold Runner features around 2500 feet of track with plenty of twists, turns and dips and will run between the two ski runs. What's nice about this coaster is that the two passenger cars have speed controls so adults and children can go down the coaster at a safe and fun velocity!

Construction is almost complete and is slated to be opened no later than November 12, or Breckenridge Ski Resort's opening day! Other improvements include revamped snow making materials and multiple renovations in local restaurants and other hospitality operations included bowling alleys and a new apres ski bar that is slope side! While you're in Keystone, consider taking a trip over to Breckenridge and checking out the Gold Runner and the new bars and restaurants, after all, your ski passes are usually good in this neck of the woods.